Water is hands down the most important liquid that we know of. Without it, life on Earth would not exist. Drinking pure plain water helps to eliminate toxins from your body, improves the quality of your skin, keeps your digestive system in check and makes you feel energised, so its a good idea to have a dispenser nearby.

Drinking water could also help you lose weight, for a number of different reasons.

Calories are units of energy and all foods that you eat contain them, but the number of calories varies for different foods.

This is because tomatoes are made up of 94% water, which has no calories, whereas the Brazil nuts contain a lot of fat, which has a lot of calories.

When you are trying to maintain or lose weight, you need to monitor calories. A lot of people are dehydrated and tend to mistake thirst for hunger. They therefore reach for a snack instead of a glass of water and so end up ingesting unnecessary calories.

If you stay in a calorie deficit, where you consume fewer calories than what your body uses on a daily basis, you will begin to lose weight.

This is because your body will turn to its fat stores as a source of energy. However the opposite is also true. If you are in a calorie surplus and consume more calories than what your body uses, the extra unused calories will be stored as fat, causing you to gain weight.

The table below shows you the number of calories found in different drinks, per 300 ml serving.

You will quickly notice that pure water is the only calorie free drink. This is important to know if you are trying to lose weight because many people may not be aware that just like how you can eat your calories, you can drink them too.

Water also does not contain any added sugar, like many of the other drinks do – when it comes to weight management, sugar is the enemy.

You can use our calorie calculator to determine how many calories you need to consume to begin losing weight. For example a 40 year old lady who weighs 80 kg, is 160 cm tall and exercises 1 – 3 days a week would need to consume around 1583 calories to start to lose weight.

Lets say she currently consumes 2000 calories a day, which includes a glass of orange juice in the morning and a can of Coca Cola with lunch. If she replaced both of these with pure water, she would end up consuming 1726 calories, instead of 2000. So by making a simple substitution, she would be much closer to 1583 calories than she was before.

There have been numerous studies which show the positive effects that swapping calorie dense drinks with water can have when trying to lose weight.

This cross-sectional analysis of responses from 4755 individuals aged 18 to various surveys found that those who consumed more water also consumed 194 fewer calories per day.

A school based study in Germany aimed to encourage children to drink water and thereby reduce obesity rates. The results showed that in schools where water intake was increased, the risk of obesity fell by 31%.

So if you drink a lot of sugary or calorie dense drinks, swap them for water instead and you will begin to notice the benefits they have on your weight. 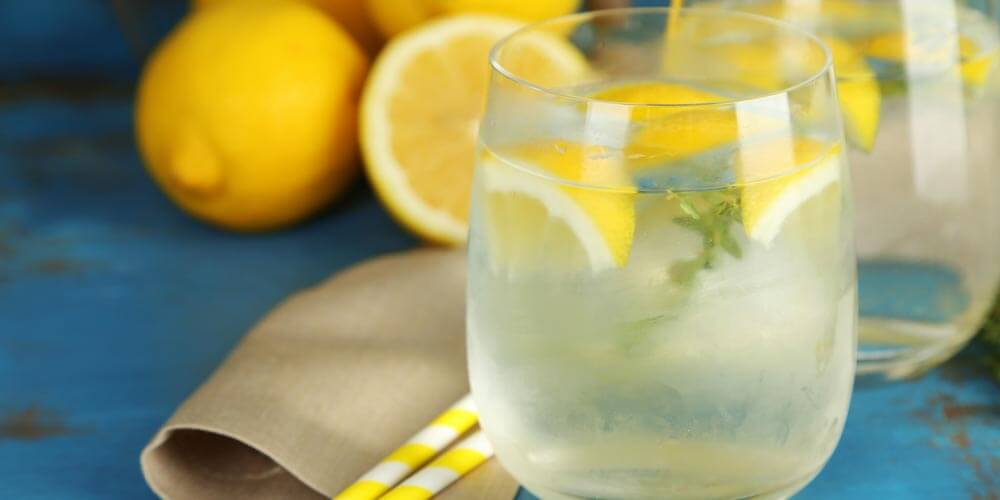 The great thing about water being the most abundant liquid on Earth is that lots of scientific studies have been carried out on it. Included in these studies are those that examine the effect that drinking water has on calorie expenditure.

In this study, 48 adults aged between 55 and 75 years with a BMI of 25 – 40 kg / m(2) were split into two groups. The first group followed a calorie deficit diet and drank 500 ml of water before each meal. The second group only followed a calorie deficit diet. The results showed that after 12 weeks, the group that drank water lost on average 2 kg more than the other group.

Drinking water has also been shown to boost metabolic rates and therefore lead to the burning of calories. For example, this study looked into what effect the drinking of water had on 14 normal weight adults. The results showed that drinking 500 ml of water increased metabolic rate by 30%. When a similar study was carried out on overweight or obese adults, it was discovered that energy expenditure increased by 24%. And another similar study carried out on overweight and obese children found that drinking cooled water caused a small increase in energy expenditure.

This study found that adults who drank water before breakfast had a 13% reduction in calories consumed.

How to drink more water if you don’t already

Various factors such as your body size, activity levels and the outside temperature all determine how much water you need to be drinking. On average, most people require between 1 and 2 litres of water. The best indicator is your own mouth – when you feel thirsty, you should drink.

Pure water is obviously the best kind that you can drink but you can also increase your intake by consuming teas, coffee, fruits and vegetables.

A great way to increase your water intake is to buy a fruit infuser water bottle like this one. Bottles like these are great because they get rid of the bland boring taste of water.

Another option is to make or buy a “timer bottle” that has various times marked on it, which indicate when you are meant to have a drink of water.

You can also install apps like this one on your phone that let you set targets and also reminds you when you should have your next drink.

Like anything else in life however, too much of anything is bad for you and the same is true for water. Drinking too much water leads to over hydration, is dangerous and should not be attempted.

Water is by no means a weight loss miracle and drinking it will certainly not cause you to drop a dress size overnight. However when combined with a calorie deficit diet and regular exercise, it will definitely help.

If you drink soda, fruit juices with added sugar or other calorie dense drinks, the first and easiest step would be to swap them for a glass of water instead. Also, the next time you feel hungry, stop and take a minute to think whether you really are hungry or are just dehydrated.

Can you lose 20 pounds in a month?
Is black coffee good for weight loss?