The Oxford Dictionary defines a heavy sleeper as “a person who sleeps deeply and is difficult to wake up”.

Many people who are heavy sleepers tend to have genuine trouble with getting themselves up for work or school in the morning, with regular alarm clocks failing to rouse them from their slumber.

However, there is a new breed of alarm clock that is fast becoming popular with people who class themselves as heavy sleepers. Below are the best rated models available on the market.

Healthsomeness.com is a participant in the Amazon Services LLC Associates Program, an affiliate advertising program designed to provide a means for sites to earn advertising fees by advertising and linking to Amazon.com

Amazon and the Amazon logo are trademarks of Amazon.com, Inc. or its affiliates. 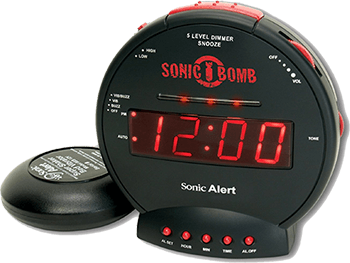 The Sonic Alert SBB500SS is designed to rouse even the heaviest of sleepers thanks to its incredibly loud 113 decibel alarm and bright flashing lights.

The volume can be adjusted to suit your needs, which is handy for anyone living in shared accommodation. Even with the alarm tone off, you can still rely on the bed shaker to wake you up – in fact there are a number of different combinations of sound, vibration and lights to allow you to adjust the alarm clock to your individual needs and reduce potential annoyance to other household members.

The bed shaker pad is connected to the alarm clock using a long thin wire that allows maximum flexibility over the position of both the clock and the shaker.

A dimmer switch on the top of the device allows you to adjust the brightness of the clock and a battery pack located in the back means that you can still use it during power cuts or whilst on-the-go. 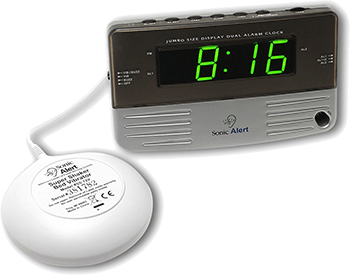 The Sonic Alert SB200SS has a dual alarm feature that allows you to set two separate alarms, which is ideal for someone who is likely to sleep through the first one or if two people need to get up at different times.

The volume control for the alarm has multiple levels, including the option to switch it off entirely, and the tone of the alarm can be adjusted to help prevent you from getting too used to the sound and, therefore, sleeping through it.

The bed shaker is designed to be placed under the pillow or mattress and will vibrate powerfully in order to encourage you to wake up. It can be used with or without the alarm.

The clock can be used both at home and whilst on-the-go, e.g. whilst camping, because it can be powered by both mains electricity and a 9v battery. 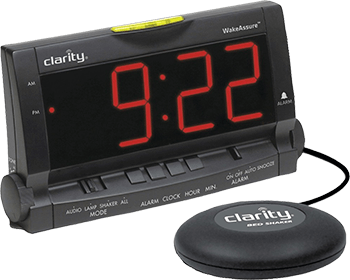 The Clarity Wake Assure has four modes: audio, lamp, shaker or all three.

The lamp feature allows you to hook the alarm clock to certain lamps so that they will flash on and off to help wake you up, which is perfect during the darker months when many of us like to sleep for longer.

You can adjust the tone and volume of the alarm, which helps to prevent you from becoming used to the sound and, therefore, sleeping through in the morning.

The bed shaker can be placed under your pillow or mattress and vibrates when the alarm is activated; it is connected to the alarm clock via a long cable.

The clock can be powered either from the mains or from the battery pack located on the back of the device, making it versatile and perfect for use at home or whilst travelling. 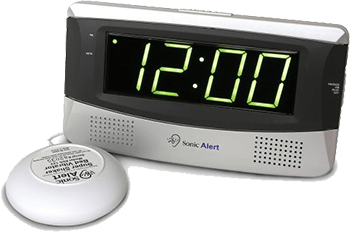 The Sonic Alert SB300SS is incredibly loud, with the alarm reaching 113 decibels; the tone and volume can also be adjusted to suit your individual needs.

The large display makes it easy for you to see the time, which is perfect for the visually impaired, and it can be used as either a 12-hour or 24-hour clock.

A dimmer switch on the side of the clock allows you to adjust the brightness of the display, ideal for anyone who likes to sleep in a darkened room.

The vibrating pad is connected to the alarm clock using a long cable that can be detached when the pad is not required. It is usually placed under the pillow or mattress, but some people also pop it on a bedside table or dresser and use the sounds from the vibrations to wake them up instead of the alarm.

Why are some people heavy sleepers?

It is not entirely clear why some people are more prone to being heavy sleepers than others; there hasn’t really been much research conducted in this area.

However it is understood that not everyone who is a heavy sleeper is that way from birth, many people just start to have issues with waking in the morning.

Of course, it is important to bear in mind that a person who is depressed may also struggle with waking in the morning when they didn’t before, so this shouldn’t be confused with being a heavy sleeper in general and medical advice should be sought.

A study conducted by Jeffrey Ellenbogen in the 1990’s did reveal that people who were classed as heavy sleepers tended to have a lot more brain activity occurring during the hours of sleep than those who were not.

Markers known as spindles were observed in twelve volunteers in order to measure the brain activity during their sleep periods. The spindles were “activated” by playing a variety of noises throughout the night. Ellenbogen’s team found that the volunteers who were harder to wake up had higher frequencies of spindles.

It is possible that people who are classed as being heavy sleepers simply have more information being processed by their brain, which means they need deeper sleep; this would explain why some people can go through phases in their lives of being a light or heavy sleeper, depending on what is going on in their lives at the time.

Regardless of the reasons, it is clear that some people need help in order to get up at a proper time in the morning and that is where specially designed alarm clocks come into play.

What type of alarm clock should a heavy sleeper use?

Generally speaking, alarm clocks that are designed with heavy sleepers in mind tend to be much louder than traditional alarm clocks, with some reaching as high as 113 decibels, which is louder than a power saw.

They also tend to continue running until they are manually switched off, unlike most standard alarm clocks which run for a few minutes before automatically switching off. Many alarm clocks of this type have variable tones and volumes, thus allowing maximum control and the ability to tailor use to individual circumstances.

Another main aspect of this kind of alarm clock is the bed shaker, which is basically a circular pad that is placed under a pillow or mattress and vibrates vigorously to encourage you to wake up.

Some designs will increase the intensity of vibrations after each time the snooze button is pressed, encouraging you to get out of bed.

Some alarm clocks can also be linked to bedside lamps and will then switch them on and off to provide another form of stimulus to encourage you to wake up – indeed, the vibrations and flickering lights are ideal for someone who is hearing impaired and might not even be awakened by the sound of the alarm.

Things to consider before buying one

There are a few things to consider before buying an alarm clock designed for heavy sleepers and they include:

Noise – these alarm clocks can reach different levels of volume, with some only being slightly louder than standard alarm clocks and others, as mentioned above, being louder than power saws, so it is important to establish how loud you need your alarm to be.

It is also essential to think about where your alarm clock will be situated because if it can only be put near your bed, then you need to factor in the level of sound that will be occurring right near your head. Consideration for neighbours and others who share your living space should, obviously, also be given.

If you are buying the alarm clock for someone who is hearing impaired though, then you may well want to investigate the alarm clocks that also have the option to connect to bedside lamps.

Portability – is this going to be an alarm that you use at home, or whilst on-the-go? If the answer is both, then you want to ensure that your clock can be operated by both mains electricity and battery power.

However, if you only want something portable, perhaps for when you are staying in noisy locations that require you to use ear plugs at night, then a portable, battery-operated model might be better suited to your needs.

Benefits of having a good alarm clock to wake you up

It is pretty obvious what the benefits are to having an alarm clock designed for heavy sleepers, but they include:

Better routine – anyone who struggles to get up in the morning will appreciate the pressure to keep routines in check when dealing with this issue. By using an alarm clock, you begin to adjust your body clock and subsequently are able to make the best of your daily routine, perhaps even fitting more into your day.

Increased productivity – whether you work from home or in an office, it is clear that getting up at a reasonable hour will help to improve and increase your overall productivity. This is because you will have had time to get properly ready for the day, as well as having clawed back some much needed morning time to get other essential activities slotted in that you were perhaps unable to before.

Reduced stress – accompanying the previous benefit, if you are able to awaken at a reasonable time each morning, thus giving yourself plenty of time to get prepared for the day, you are more likely to be in a better mood and suffer less from the stress that comes with rushing around first thing in the morning; a mood that can carry over into the rest of the day.

There aren’t really any major risks or warnings associated with alarm clocks that are designed for heavy sleepers; however, one thing that should be considered is the volume of the alarm. Some alarm clocks are so loud that they can cause pain to users who are heavy sleepers but perhaps don’t have a hearing impairment. This can obviously cause damage to the ear drums.

Another thing to consider is the vibrating pad that often accompanies these types of alarm clocks. In most instances, the pads are linked to the alarm clocks using a long cord, which makes them unsuitable for use by children, but also by people who are prone to moving around a lot in their sleep; this is because they could become tangled up in the cord and either damage the alarm clock or injure themselves.