Peanut butter – you either really love the taste or can’t stand the sight of it. Fortunately for me, I fall in the former group and use it pretty much everywhere; I add it to smoothies, spread it over apple slices (they’re delicious!) and sometimes just gulp down a tablespoon full of the stuff.

You may have heard that nuts, seeds and legumes (peanuts are legumes) are high in protein and because gluten is a protein as well, this might cause some confusion. So does peanut butter contain gluten or can people who cannot tolerate gluten enjoy it as well?

Gluten is the general name that is given to a number of natural proteins found in grains such as wheat, rye and barley. The two most common proteins in gluten are gliadin and glutenin, with gliadin being behind most of the gluten related health problems you hear about.

When water is combined with gluten, it gives it a sticky glue like consistency and this helps bind certain foods together, giving them their shape. It also gives foods such as pizza a stretchy and chewy texture.

Food manufacturers began to realise that if they added gluten to certain foods they were producing, they would be able to produce larger quantities, with very little cost – and so they began doing it. This is why many more foods than you may have initially thought contain gluten.

Who does gluten affect negatively?

The majority of people can consume gluten without having any adverse health problems. However it does cause issues for people with celiac diease, gluten sensitivity and wheat allergies.

Celiac disease affects roughly 1% of the global population and is an autoimmune disorder that causes damage to the small intestine, when gluten is consumed.  This in turn can result in nutrient deficiencies and many other diseases. Common symptoms of celiac disease are bloating, constipation, diarrhea, skin problems and weight loss.

Lastly, there are people who are allergic to wheat; consuming gluten causes them to have digestive issues.

People who suffer from any of these 3 ailments definitely need to eliminate gluten from their diet.

For the general public, gluten free diets started to become extremely popular when going gluten free was associated with weight loss. However keep in mind doing so will not guarantee that you will lose weight.

What is peanut butter made from?

Store bought varieties of peanut butter vary greatly in terms of the ingredients they contain. There are so many brands and different manufacturers may devise their own recipes to make the taste of their product unique. However, the main ingredients used to make peanut butter are:

Below are the ingredients used for some of the most common peanut butters that are bought in store:

All of the products above are gluten free.

However, to be safe you should always read the ingredient labels of any product you buy, especially if you are doing so for the first time. The major ingredients used to make peanut butter are gluten free but certain companies may decide to change recipes and on rare occasion, might include a gluten containing ingredient.

If the peanut butter is gluten free, it will say so on the label.

How can peanut butter cause problems for gluten intolerant people? 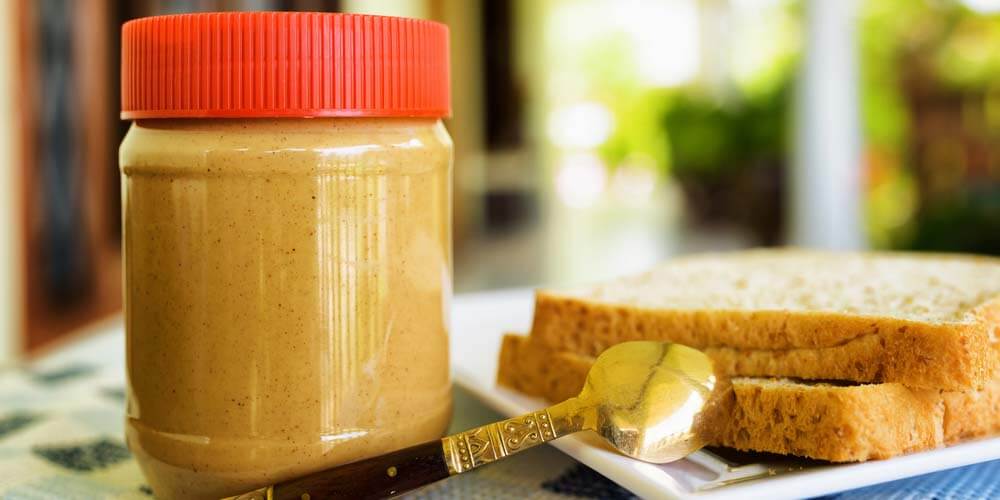 Alternatively, gluten free versions of bread are available in many supermarkets and can also be bought online, so opt for these instead.

Another thing you need to be wary of is cross contamination. You may not eat gluten, but could accidentally be exposed to it.

For example consider this scenario. Someone in your house who eats regular bread uses a knife to butter the bread with peanut butter. They then scoop out some more peanut butter, to apply a second spread. Unknowingly, they may have just transferred a few gluten containing bread crumbs into the peanut butter.

And even crumbs matter, when you are trying to avoid gluten. So your safest option would be to have a separate jar of peanut butter just for yourself. In fact, have a separate food shelf!

Make your own peanut butter!

Making peanut butter is extremely simple so if you want to be extra sure that the peanut butter you are eating is gluten free, make your own in the comfort of your home. Doing so will also mean that you can control the amount of sugar & salt you add, and get rid of any unhealthy additives.

To make peanut butter you will need peanuts (surprise!), honey, a little bit of salt and some peanut oil. You will also need a good food processor if you want the peanut butter to have a smooth texture. Watch the video below for further instructions.

If you are gluten intolerant you do not need to be afraid of peanut butter as most brands are gluten free. However, always read labels, just to be extra sure!

Does protein make you gain weight?
20 fruits high in fiber