Which potatoes are the healthiest?

Potatoes are one of the most commonly consumed vegetables with over a billion people eating them, and for good reason. They are extremely versatile and can be prepared in many different ways – boiled, steamed, baked, fried and roasted. If you are a fan of potatoes you have probably added them to salads and soups or mashed them up and eaten them as a side.

The table below contains nutritional information for 100 g of different potato varieties.

As you can see, the 4 different types of potato above are very similar nutritionally. Most potatoes mainly contain carbohydrate with a little bit of protein and almost no fat.

So are potatoes healthy?

There are conflicting thoughts and studies as to how healthy potatoes really are. For example, according to the Harvard School of Public Health, potatoes appear to be a culprit for diabetes and weight gain. The main reason for this is because potatoes have a high glycemic index (GI) and high glycemic load (GL).

This means that consuming them causes a large spike in blood sugar and insulin levels, followed by a quick drop. According to the research, potatoes can be as bad as a can of Coca Cola, with the rapid rise and fall in blood sugar leaving people feeling hungry and causing them to overeat.

It is true that potatoes do have a large effect on blood sugar levels, however there is more to the story than that. Potatoes are also very nutritious and bring with them a number of health benefits. They are rich in potassium,  magnesium, iron and vitamin C. All of these vitamins and minerals are important for your health.

Vitamin C is an antioxidant and is useful to the body for boosting immune system function, treating allergies such as eczema, healing wounds and maintaining healthy gums. It is also important for great skin. A medium potato contains roughly 70% of your daily requirement of vitamin C!

The high fiber content found in potatoes means eating them helps keep you regular and maintains bowel health, thereby reducing your chances of suffering from constipation. Fiber is also beneficial for heart health.

The important thing to note about consuming potatoes is portion control and preparation method. Like with other things in life, too much of anything is bad for you and the same goes for potatoes. Since they are a carbohydrate rich food, they should be eaten together with a protein source such as chicken or fish – hence the saying “meat and potatoes” – and in moderation. On the plate, potatoes should be considered as a grain rather than a vegetable and should not be eaten on their own but with other vegetables such as spinach and broccoli.

Also rather than deep frying them, steam or boil them as this is a much healthier way of eating them. If you are going to mash them, reduce the amount of butter and cream you add as both are rich in calories.

One thing to note is that even if they are prepared in a healthy way, potatoes might not be suitable for people who are obese or suffer from diabetes. If you are concerned about eating them, speak to your doctor before doing so.

Which type of potato is the healthiest? 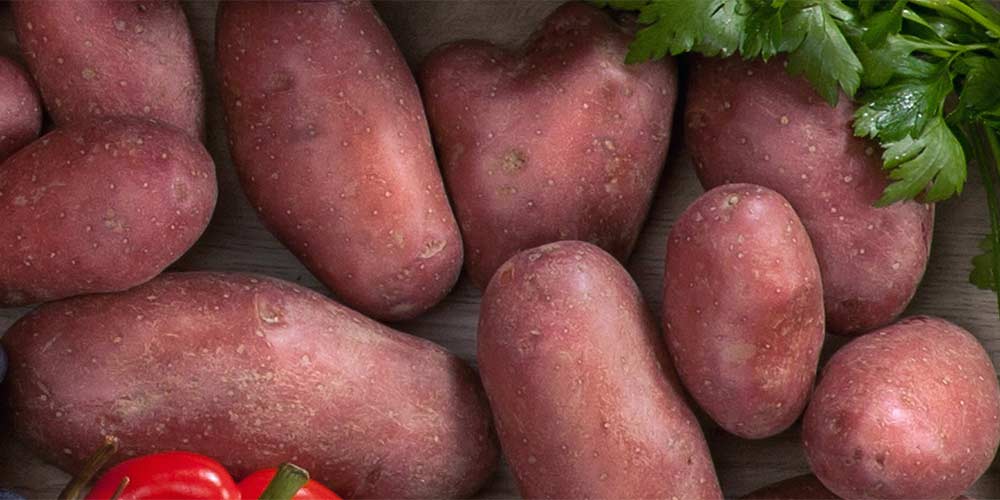 All potatoes contain similar amounts of calories, carbohydrate, protein and fat per 100 g, with carbohydrate content being the highest. So doesn’t that mean that all potatoes are equal in terms of how healthy they are?

Not quite. The colour of the potato is important as well. Yellow and purple potatoes for example are rich in carotenoids and flavonoids.

Carotenoids are abundant in carrots, apricots and squash but are also found in certain types of potatoes. They play a vital role in our health, helping to fight off cancer and decreasing the risk of eye disease.

So if you are going to eat potatoes, eat ones with coloured skin and flesh over white ones, to gain maximum health benefits. Additionally, don’t throw away the skins, they are rich in fiber, vitamins and minerals.

When choosing your potatoes, go for fresh and organic whenever possible. They will be more expensive, but will contain lower amounts of pesticides & other agricultural chemicals and be richer in beneficial compounds.

What about sweet potatoes?

Sweet potatoes in general are lower in calories, protein and carbohydrate but higher in fiber, when compared to regular potatoes. They also contain more sugar, giving them their sweet taste.

Like potatoes, sweet potatoes come in a range of colours including white, orange, red and purple. Due to commercial breeding however, only certain types of sweet potato may be available at your local supermarket.

So should you eat regular potatoes or sweet potatoes? We recommend you eat both varieties, in both cases opting for varieties that have coloured skin and flesh.

There are many different varieties of potatoes however those with coloured skin & flesh and in particular purple ones seem to be the most nutritious. Your best option when eating potatoes would be to boil, bake or steam them rather than deep frying, and you should eat them with other foods such as chicken or fish which are sources of lean protein. If you are obese or diabetic, speak to your doctor before adding potatoes to your diet.

Is peanut butter a good source of protein?
Is ice cream good or bad for a sore throat?