Why does chocolate make you happy?

Chocolate has to be one of, if not the most loved food worldwide. Children love it as much as adults and often have to be kept away from it – try saying the same thing about broccoli!

It is no surprise that chocolate has been around for centuries. There is evidence of chocolate consumption that dates back at least 4000 years; the Mokaya people of Mexico and Guatemala used to consume it as a beverage. Since then it has spread around the globe and is enjoyed by people in every single country in the world.

Chocolate is made from Theobroma cacao seeds, also known as cacao beans. The beans are processed to make the 3 common types of chocolate we know today – dark, milk and white chocolate.

Not only is chocolate super delicious, the right kind of chocolate also brings with it many health benefits. One of them is that it makes you happy!

Apart from the fact that simply looking at a bar of chocolate will lift most peoples moods, eating it has been scientifically proven to do the same. Dark chocolate, which is chocolate that has been processed the least and is the healthiest kind you can eat is rich in lots of chemicals that affect your brain.

The first one is a chemical known as anandamine which was first discovered in 1992 – its name comes from ananda which is the Sanskrit word for bliss. Not only has it been shown to inhibit human breast cancer cell proliferation, it also has an impact on your mood. Anandamine has a similar structure to THC (tetrahydrocannibol), which is what gives marijuana consumers the feeling of being “high”. Anandamine has also been shown to help ease anxiety.

The second is serotonin and tryptophan. Tryptophan is converted into serotonin in the body, which plays a role in influencing your mood. Tryptophan has been shown to be an antidepressant in cases of mild depression. Low levels of tryptophan are believed to cause depression as well as anxiety and anger.

The third is caffeine, with 100 g of dark chocolate containing around 43 mg. Caffeine is a stimulant that mimics the molecule adenosine. Adenosine binds to receptors in the brain and this results in drowsiness. Caffeine is able to bind to the same receptors, however it does not cause drowsiness and so has the opposite effect on the brain: alertness. Caffeine has also been shown to induce the release of dopamine.

The fourth is phenylethylamine (PEA), often known as the love drug. It causes the release of the same chemicals as those that are released when you fall in love. And if you have ever fallen in love you know how exciting and warm those initial feelings that you get can be. Additionally, PEA has been shown to have anti-depressant effects. 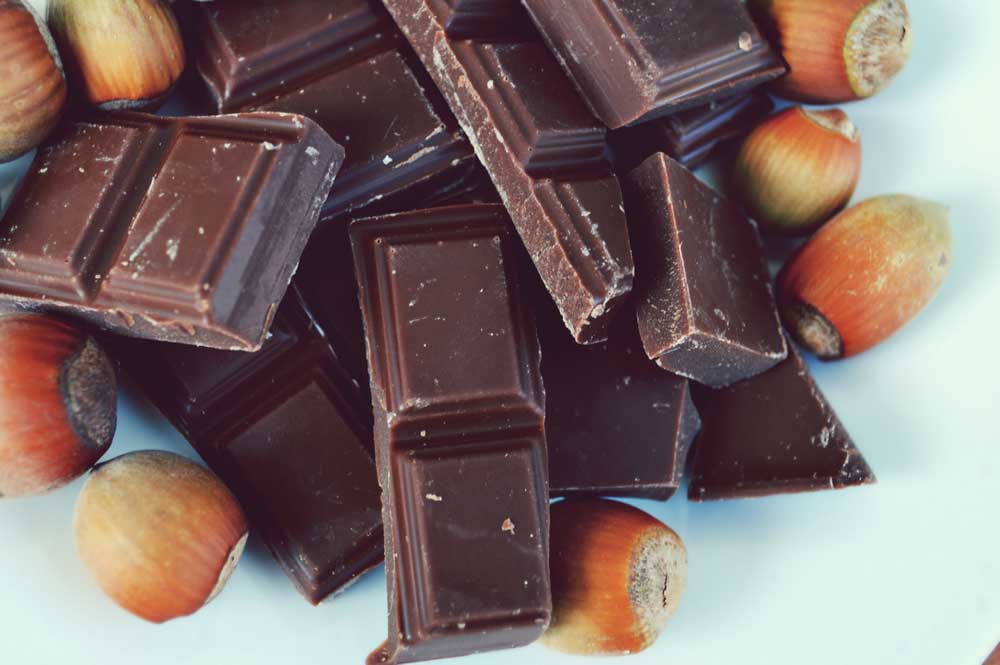 There have also been a few studies  that have looked at the effect chocolate consumption has on moods.

This study investigated what effect, if any, the consumption of chocolate had on stress levels. 60 students were divided into 3 groups, consisting of 10 males and 10 females per group. The 3 groups consumed either 40 g of dark chocolate, milk chocolate or white chocolate per day for 2 weeks and answered a perceived stress scale (PSS) questionnaire before and after consumption, everyday.

The results showed that the consumption of 40 g of dark and milk chocolate had a significant effective on reducing perceived stress. The stress reducing effect was noticed more in females than in males.

Another study had similar results. The study was carried out on 30 participants and samples of blood and urine were taken at the beginning, at the middle of and at the end of the study. The study found that the consumption of 40 g of dark chocolate everyday for 2 weeks reduced the amount of stress hormones in the bodies of people who felt highly stressed.

As you can imagine, feeling stressed can have a significant impact on how happy you feel, so the moderate consumption of dark chocolate seems to be an effective solution.

This systematic review of eight studies found that five of the studies had evidence that chocolate consumption improves your overall mood.

Does the type and amount of chocolate you eat matter?

Remember that too much of anything is a bad thing and the same goes for chocolate, so controlling the amount you eat is also important. Dark chocolate with all its benefits does contain a lot of calories and overindulging can lead to weight gain. Restrict yourself to one or two small pieces per day.

Other ways to feel happy

While eating dark chocolate has been shown to help better your mood and make you feel happy, there are a number of other ways you can increase your levels of happiness:

What vitamins are in grapes?
Is bubble tea healthy?